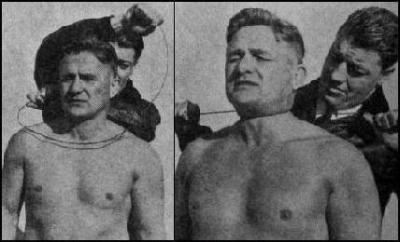 III Arms Company manufactures a garrote modeled on the original O.S.S. design, sent into action with O.S.S. agents and operators during WWII.  Garrote techniques were taught to general US Army soldiers as recently as 1971 (FM 21-150) and continues today in elite units across the US Armed Services and Intelligence Services.

CIA, US Navy SEALS and US Army Special Forces all directly trace their existence back to the men of O.S.S. – men like Bill Donovan, William Fairbairn, Rex Applegate and Aaron Bank.  Fairbairn &amp; Applegate understood the utility of the wire garrote in certain circumstances over the knife, and they trained their students accordingly.  Here is a video of US Rangers training in various garrotes and techniques. 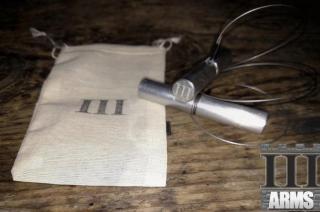 The garrote can be designed as either a strangulation weapon or a cutting weapon.  As a cutter the garrote must utilize bared wire, often a piano-grade wire.  Coated wire, rope, electrical cord, or even a leather belt will work as a strangulation weapon, especially in improvised circumstances.  Generally speaking, if an operator can afford to spill blood, a knife is often a better choice than a garrote.  However, if the operator must avoid getting wet, a garrote with a coated wire or a sturdy rope is ideal – silent and clean.

Most III Percent Patriots understand that the fight against hardcore Marxists in America – those Marxists who bring violence and particularly those who order violence while remaining safely in their offices and country clubs while surrounded by bodyguards – will require more than ARs and cammies and open conflict to defeat.

Like the O.S.S. Agents and Cold War Agents in our history, modern III Percent Patriots will often accomplish more tactical and strategic gain for Liberty by wearing the uniform of the repairman or waiter while employing a suppressed Walther or garrote, then slipping away silently as shocked Enemies of Liberty are left to bleed out on the floors of their offices, restaurants and homes as their Marxist friends shriek in horror and surprise.

Modern Patriots must embrace both the Militiaman and the Spy if Liberty is to triumph.

Make no mistake, Liberty and Tyranny are at war and every neighborhood in America is a battleground.  If your child attends public schools, you already know that Marxists and Useful Idiots in that school are pushing Marxist teachings upon your children.  There is no community in America that is immune from this fight.

Before this fight goes hot, it will be fought in the cold and the shadows by patriotic Cold Warriors.

Arm yourself with the highest quality and professionally built tools of the Militiaman and the Spy.

Be ready to fight on any ground the Enemies of Liberty present.

They mean to be Masters, as Daniel Webster warned us all.  Will you accept slavery upon bended knee – or will you fight?

Tools for the Professional Patriot, here.